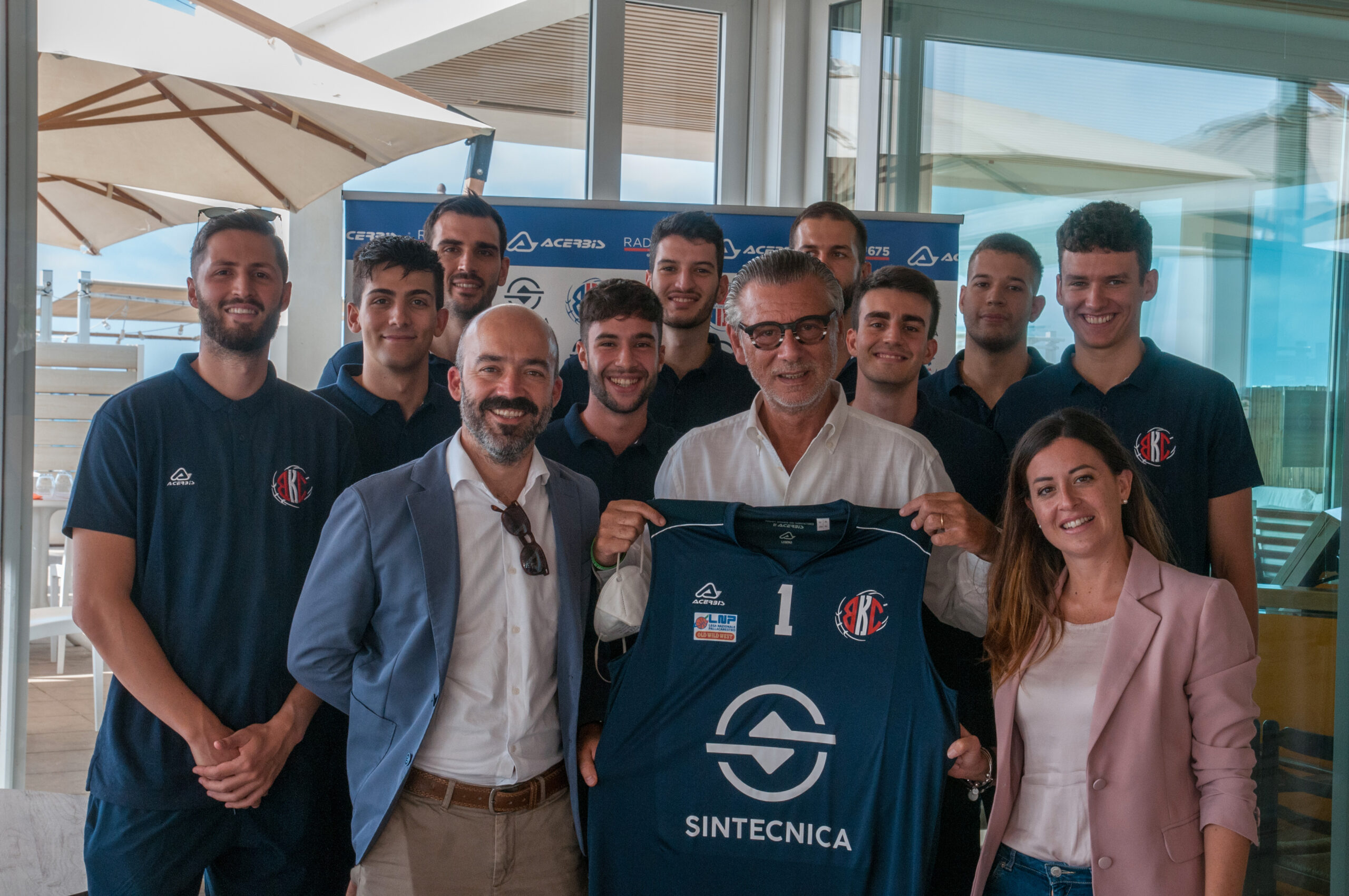 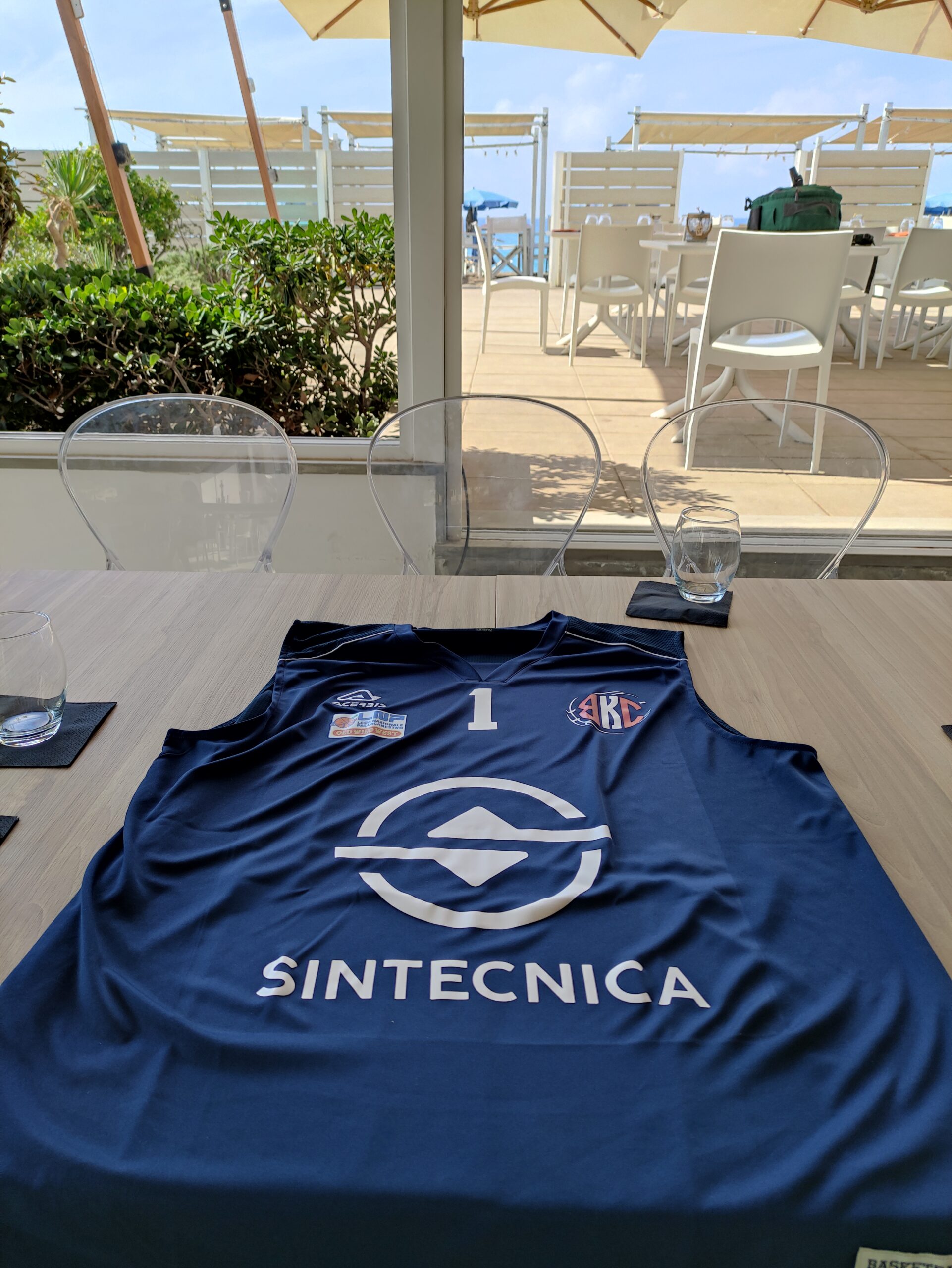 On September 29, 2021, our Director of Human Resources, William Thompson, and Business Administration Manager, Cristina Donati, joined Basket Cecina President, Elio Parietti, and the Basket Cecina team, coaches, and assistants at Parietti’s Stella Beach restaurant and beach club in Cecina to inaugurate the 2021-22 season and celebrate the recent agreement to extend Sintecnica’s sponsorship into its second consecutive season. Stella Beach’s open-air environment was unusually warm and sunny for late September when the event kicked off at 11:30, and guests lounging on the beach in front of the locale lent an almost holiday air to the festivities.

The program began with the team’s captain, Lorenzo Pistillo, who spoke about his connections to Cecina and the surrounding area, and the dream of leading the team to win the Serie B championship.

Parietti followed with a speech befitting his role, addressing the difficulties the pandemic brought during the prior season, when his team was forced to forfeit the last 5 games of the season due to Covid-19 infection, an incident which nearly cost the association its Serie B qualification despite its appearance in the league’s championship game.

Parietti continued, giving his audience a sense of his vision for the association as the central column to an ever-expanding infrastructure of sports, health and wellness that would spur tourism in the area—international, national, and local—and provide year-round stability to an economy perhaps too dependent on beach-tourism in the summer months.

Massimo Faraoni, General Secretary of the LNP (“Lega Nazionale Pallacanestro” or “National Basketball League”, followed Parietti. Although encouraged by Basket Cecina’s communication’s director and emcee for the event, Marco Puccini, to support the team’s goals of winning a championship, Faraoni responded in true bipartisan form, adding with a smile that while he supported Parietti’s vision of the sport and the league as positive influences on the community, both socially and economically, he could not comment on his hopes for the Basket Cecina season. Instead, he wished the players and coaches good luck and expressed his wishes for a season without the interruptions experienced in the prior year.

William Thompson delivered Sintecnica’s part of the program shortly after noon, encouraging the players to bring both passion and a business-like attitude to their work and reminding them that by wearing the logo of Sintecnica on their jerseys they were representing the company and its values every time they step on the court. His advice was simple: every individual should know his responsibility every moment, in game or practice, and his focus should be on fully understanding that responsibility and doing everything in his power to finish it. This, said Thompson, was the best hope for victory, no matter one’s position in life.

Basket Cecina coach Roberto Russo and assistant coach, Davide Elmi, finished the speaking part of program with thanks to both Sintecnica and Basket Cecina for the opportunity to lead such a great team, promising that they would do everything in their power to reach the goals they had set—including bringing home a championship.

The event concluded with a lunch hosted by Parietti and the Stella Beach staff.